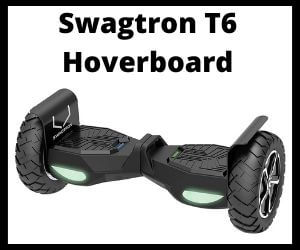 If you really looking for a riding experience like a mini monster truck then grab your hands on Swagtron t6 Hoverboard. It’s one of the deadliest all terrain hoverboard in the market under the banner of Swagtron

Loaded with tons of jaw dropping features, the Swagtron t6 off road hoverboard is one of the biggest all terrain hoverboards in the market.

And the most surprising part is, it is strong enough to accommodate the rider’s weight of up to 420 lbs.

Yes, you read it right its 420 lbs. so to all obese bulky people, Swagtron t6 can make your dream of riding come true.

Swagtron T6 is one of the best hoverboards of Swagtron. But we assure you that we have reviewed this product honestly on a fair neutral basis. Perfect hoverboard has done extensive and thorough research to write about this product. We are doing this just to make our work better and get a better understanding of the product. And of course, a better understanding helps us getting our readers to have a better picture of the product in their mind. 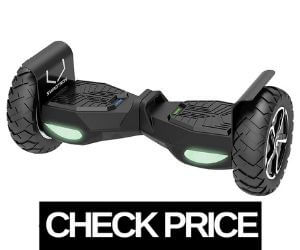 Hoverboards are the craze of today’s generation especially youngsters. But most of the youngsters do not ride on hoverboards because of certain weight limits associated with the hoverboards.

The extraordinary weight limit of Swagtron T6 makes it the number one choice of the young generation.

Swagtron t6 hoverboard is the 4th one in the T series of Swagtron Hoverboards. What makes it different from the other hoverboard in the series is, its 10-inch inflatable all terrain wheels, it’s robust and strong off road body, and anti slip footpads.

And we should not forget its superb weight bearing limit. All these features give you the wildest riding experience which you have never dreamt of. Let’s dive into its review and know more features of the Swagtron t6 hoverboard.

The safety of rider is the prime responsibility of Swagtron. This is the reason that they are working day and night to manufacturer the best products for their customers. And of course, nobody wants their product to be exploded. Just to avoid this they have made sure that their T6 hoverboard is exclusively safe and sound by taking certain steps.

Firstly, Swagtron hoverboards are first in the market with an overall UL2272 certification, UL stands for “Underwriters Laboratories” which are there for centuries specific for product safety testing. They are known to produce safety certifications for hoverboards and self balancing scooters.

Talking about its battery, it has a Swagtron patented UL 2271 certified Sentry shield battery pack which is immensely resistant to overheating.

It’s 100% sure that will not gonna explode. Not only this they have Battery Management System which monitors the battery and constantly checks for anything such as temperature increase, overcharging, over current and short circuiting.

So it will not be an ill statement if I say that the Swagtron T6 hoverboard has been deemed completely safe to ride.

This giant beauty of Swagtron requires much power to operate. And that’s the reason it is quite exciting for its riders.

Talking about its speed and mileage. Swagtron T6 has an extraordinarily fast speed of 12 mph. your mini monster truck can reach the maximum range of 12 miles, which I think is more than enough to enjoy.

Its rugged all terrain 10-inch inflatable wheels provide shock absorption and stability for added comfort no matter how uneven the terrain becomes.  So you can easily ride over hills, rocks, and other rough terrain in no time.

Coming towards the most prominent feature that makes Swagtron T6 an extraordinary hoverboard. It has a weight bearing capacity of up to 420 lbs, which is approximately twice as much as the majority of other hoverboards available in the market. This means how obese or bulky you are, for Swagtron it’s not at all a big deal to carry you.

With Swagtron T6 hoverboard you can convert your night time into swag time.  It has powerful and energy-efficient Led lights that make you and your way visible at night.

Although it’s one of the flawless hoverboards if you face any kind of technical issue you can easily contact its customer care center, which is easily accessible and quite supportive. Swagtron T6 hoverboard comes with one year of warranty.

Get in control with Swagtron app:

Swagtron has an array of unlimited features, ideal for pro riders. With its integrated official Swagtron App you can easily monitor your hoverboard speed, control its LED lights as well.

And above all Swagtron Mobile app is easily compatible with iOS and Android phones. Just download the app on your phone and get control of your Swagtron T6 in your hands

I am sure you won’t like chocolate cake without the chocolate. Same goes with a hoverboard. Hoverboard without speakers is simply boring. Swagtron T6 with 10 inches all terrain tires and powerful speed, has also incredible stereo surround speakers that make your ride fun-filled and entertaining.

With all other exciting features, Swagtron T6 is equipped with energy efficient and bright Led lights. These lights are capable enough to bright up to 6.5 feet in both directions.

Why Should You Buy Swagtron T6 Hoverboard?

There are trillions of hoverboards in the market, each differs from others in every aspect. But the hoverboard which I have just reviewed is simply amazing. It’s a gem. Literally, you won’t find such an amazing and incredible product with so many features. Though there are many reasons that force you to buy a Swagtron T6 hoverboard. But I am gonna list a few of them:

Swagtron T6 is just like a mini monster truck. It is one of the exciting and superb hoverboards of Swagtron’s T series. Its 10 inches all terrain tires and 12 mph speed, makes it one of the fastest hoverboard available in the market. Moreover, its weight bearing capacity makes it easier for wider people to hover around. In a nutshell, it’s simply incredible.