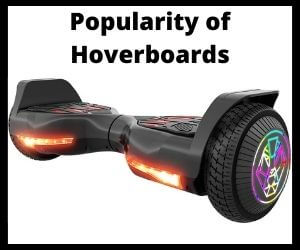 Given the global warming and scarcity of natural resources, the world needs a transportation system that is both environmentally friendly and affordable. Hoverboards are exciting personal transportation electric vehicles with no smoke, which makes them a perfect choice in the current period.

Popularity of Hoverboards in 2021

Furthermore, these are cheap and extremely easy to maintain. Hoverboards are divided into two main categories: Expensive hoverboards and cheap hoverboards.

The main difference between the two is that expensive hoverboards are docile more than cheap hoverboards. Moreover, they allow customization e.g. you can attach a go-kart to make it more exciting and suitable for the daily commute.

According to a study, hoverboards have a £2.5 billion market and is growing at an exponential rate. The growth was slow initially because of the exploding battery incidents. However, after the successful implementation of safety regulations, sales of hoverboards is increasing at a tremendous rate.

To meet the demand and to keep hoverboards relevant, companies are introducing new variants; new shapes, and features. As compared to the early years of its introduction, the hoverboard now has extended battery life and is speedier, so it can attract people from all age groups.

Some sites claim that the major chunk of its popularity is due to its frequent appearance in movies. It appeared in ‘Back to the Future’ movie, which somehow helped it reach a wider audience. However, we attribute the popularity to improved safety and the introduction of new exciting features.

Most governments legalized the use of hoverboards on public pavements except few cities in the UK, which added to the popularity of the self-balancing machine.

In few high-end hoverboards, manufacturers introduced a handle-bar, which assists in balancing, and is more comfortable than cheap hoverboards.

External factors that assisted in the popularity are global warming and the increasing price of gas, so people are now searching for other forms of conveyance. Hoverboards along with electric scooters and skateboards are the best options when it comes to responsible and cheap conveyance.

Best hoverboards have a mobile application, which is equipped with multiple functions. Most applications can change the color of the LED lights, change the mode, initiate security alarms, and change music. Recently, hoverboards became more popular among teenagers due to the smart application.

In past, hoverboards were perceived as toys only, but now hoverboards have become more than toys with a powerful motor and all-terrain tires, hoverboards can be used as the off-roading machine. Most high-end hoverboards have the capacity to climb 15 degrees of a slope with ease and the chases are high-off the ground.

High-end hoverboards can cover an average distance of 12 miles on a single charge, which is not impressive comparatively, but better than the old models of hoverboards, so the improvement in the battery life has played a crucial role in the popularity of hoverboards.

Early hoverboards had a limited speed, still, they caught the attention of many, the latest hoverboards can move at a whopping speed of 15 miles per hour, which together with the self-balancing feature gives sensational experience; therefore, all the adventure seekers now follow hoverboards.

Challenges in the Future:

In recent years hoverboards have become famous among all age groups, and the manufacturers are launching new models every now and then to keep hoverboards a hit in the market. Among the hoverboards, high-end hoverboards are the most famous as they are more than toys and can be used for multiple purposes unlike the earlier hoverboards, which were meant only for kids.

Over the years, the self-balancing feature and off-roading capacity of hoverboards have improved substantially; therefore, they can now be used in almost every kind of terrains, but the cheap hoverboards are only designed for paved roads and carpets. In the future, hoverboards will be among the most demanded commodities because of their intriguing concept and eco-friendly battery.